Can they interbreed? Is there such a thing as a mosquito fish guppy hybrid?

You will be able to compare and find out so many details to figure out the difference between mosquito fish and guppies in this article.

What Are The Difference Between Mosquito Fish and Guppies?

Do not be confused with Mosquito Fish and Guppy being classed together as mosquito eating fish.

They have similar sizes and breeding patterns. Mosquito fish produce their fry in the summer while guppies breed every month. Mosquito fish are usually tan, gray, yellow or olive. Guppies come in all sorts of colors.

Let’s look into the differences and similarities of both of these fish.

No. Mosquito fish are not guppies. You may mistake them for the similarities mentioned in this article. They are both live bearers and can withstand similar temperatures.

Mosquito fish are slightly larger and their color range is limited compared to the wide variety of colors for guppies. They belong to the same Poecillidae family group, but cannot breed together. Mosquito fish tend to be slightly more aggressive.

I wouldn’t put mosquito fish with my guppies because the long flowing tails of my guppies will get nipped at by my mosquito fish. I keep them in separate tanks. Mosquito fish also breed less often at about once a year every summer while guppies breed every 30 days or so. 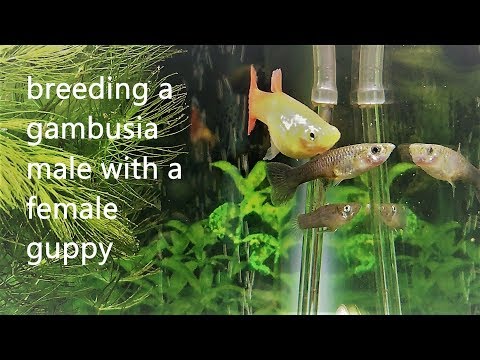 There is no such thing as a guppy mosquito hybrid from my experience and the respected opinions of master aquarists. This has been tried, but there are no known results that I know of.

Is A Mosquitofish More Aggressive Than a Guppy?

Yes. You will not notice a huge size difference between guppies and mosquito fish. The mosquito fish is slightly larger and this makes them a little more aggressive towards guppy fish. Females are larger than males in both species.

I notice mosquito fish nipping on the fins of smaller fish. They also like chasing after the flowing fins of guppies.

If I keep mosquitofish with larger tankmates, they will be more peaceful and less prone to chasing or fin nipping. It’s better to house them on their own to keep them happy.

Is A Guppy More Social Than A Mosquito Fish?

Yes. We notice that both types of fish are docile and peaceful in their own tanks. Guppies are more social because they live in groups and shoal together.

Mosquito fish are far less social in terms of shooing each other away and preferring to live in peace on their own. I’ve seen mosquitofish getting angry at larger fish like koi in a community tanks. This is why I decided to house them on their own separately from other community fish.

They will live among their own species and shoal socially together, but they will not want to mingle with other species the way guppies are known to do.

The females of both species are not as colorful as the male who need to use their appearance to garner the attention of females for mating purposes. Females do not have color on their tails.

Male mosquitofish are only:

Most of the time both sexes of mosquitofish cannot compare to the brilliance, shine and color patterns of guppies. The tail of a mosquito fish is also short and round. Male guppies have flowing tails and that vibrant and colorful.

Which Is Better? Mosquito Fish or Guppy?

Mosquitofish can handle colder temperatures. Guppies require warm water. Mosquito fish are less social. Guppies can mingle with other species of fish. Mosquitofish do not breed as often and their population can be controlled better. Guppies breed every month.

Overall, I would go with the social guppy who is far more beautiful in his appearance as a male and their female is less aggressive. The choice is yours in the end, but we recommend keeping mosquito fish on their own for a more peaceful ecosystem.

Thanks for visiting HelpUsFish.com for this article on Guppies and Mosquito fish. We have plenty more informative articles for your interest. Check out our home page and search bar for hundreds of more selections that could benefit you and your aquatic life. Bye for now!