Are you frustrated with persistent Black Beard Algae growth and you’re here for a solution? Do you know which species of fish, shrimp and snails can work with you to defeat this reoccurring nuisance? You’ve arrived at the right place if you need some helpers to eat up Black Beard Algae.

What Is Black Beard Algae?

This stubborn subtype of red algae can also appear as blue or green. It resembles dark looking hair that doesn’t wish to leave your aquarium once it has arrived.

Also referred to as Black Brush Algae, this persistent type of algae grows on:

You may have had this algae introduced through the addition of new decorations, plants and fish, but now it’s time to get rid of it.

How Do I Get Rid Of Black Beard Algae In My Fish Tank?

We have dedicated another article on how you can work on this issue by yourself, but today’s topic involves helpers from within your aquarium.

Injections of carbon dioxide, adding more live plants, hydrogen peroxide and good old fashioned tank cleaning is explained in deeper details in our next article (How Do I Get Rid Of Black Beard Algae In My Fish Tank?)

Thankfully, you don’t need to go at this alone. Are you ready to bring in some help? It’s time to bring in the Black Beard Algae eaters!

What Will Eat Black Beard Algae?

Before you cross your fingers and wish for your algae eaters to get to work, you can help to soften up the Black Beard Algae with CO2 injections available in canisters at your local fish shop.

You can also purchase liquid carbon, but we recommend injecting CO2 for the safety of your aquatic life compared to large quantities of carbon poured into the tank. Now it’s time we bring in our aquatic companions to help us out:

The list is large and we’re here to provide as many examples as possible. If you read further, we’ll focus on some of our favorites to eat that Black Beard Algae in your tank.

The following 6 fish reached the top of our list to eat Black Beard Algae. Let us know about your experiences by emailing us. You may have a different ranking order, but we’re going to explain why these 6 made our list today:

The Florida Flag Fish is also referred to the American Flag Fish. Although they may only grow to about 2 inches in length, these killifish have a ferocious appetite for algae. They are one of the least pickiest eaters we’ve ever come across in this hobby.

They are hardy, peaceful and quite attractive to add in your community tank. Let the Florida Flag Fish get to work on your Black Beard Algae problem and thank us later.

Some of you may not agree with this selection for two reasons:

With the negatives out of the way, let’s focus on how much Black Beard Algae these Chinese Algae Eaters can actually consume. Bring them into your tank as hungry adolescents and watch them go to work.

If you have the space and do not wish to populate your tank with many varieties or quantities of fish, then you can rest assured that the Chinese Algae Eater has your back when it comes to devouring Black Beard Algae.

Although it is easily mislabeled or mistaken as a Siamese Algae Eater, Flying Foxes are a freshwater fish that thrives off eating mostly green algae.

We have had success with introducing flying foxes in our tanks to clean up and munch on Black Beard Algae that we have initially softened up with CO2 injections.

You may have heard them being referred to as Bulldog Plecos partly due to their less desired appearance compared to the more popular Bristlenose Pleco, but these fish can truly devour Black Beard Algae.

The Rubber Lip Pleco is a hard worker, but make sure to give them enough room in a tank over 25 gallons to allow them the room to maneuver.

This is our favorite algae eating pleco for their determination to pick at the toughest strains including the elusive Black Beard Algae.

We love the appearance of Twig Catfish, but we acknowledge its shy nature. The tankmates of Twig Catfish shouldn’t compete with its effort to eliminate your algae problem or they may retreat and hide.

With a thin body and average length of 6 inches, they can can fit into 20 gallon tank, but prefer 30 gallons or more if possible. Keep the water as pristine as possible and provide some current to mimic their natural environments so they can happily take care of your Black Beard Algae problem.

They will pick at Black Beard Algae even when it’s rough, stiff and hasn’t been softened or loosened up yet. Once your Siamese Algae Eater grows into an adult, a varied diet becomes more common as they start looking for more sources of food. 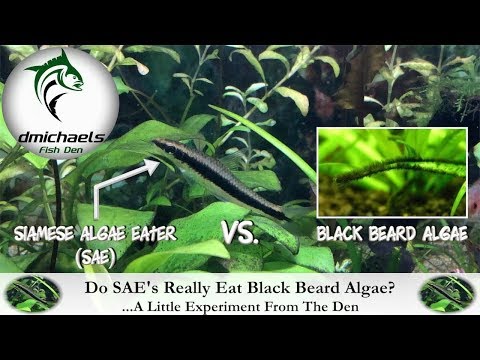 Your fish are not the only helpers that wish to eat up Black Beard Algae. We’ve enlisted the help of our favorite shrimp to include in community tanks for the purpose of eating algae. Here are our top 3 in no particular order:

These ornamental shrimp will not only eat green algae, hair algae and Black Beard Algae, they’ll take care of detritus and leftovers as well. Cherry shrimp are very common and inexpensive to purchase. They breed quickly and easily to expand their algae eating army.

Amano shrimp grow larger than Cherry shrimp at about 2 inches. The added size gives them the appetite advantage to eat more bites of Black Beard Algae in your tank. The only downfall is that they won’t breed in your freshwater tank and are pricier than most ornamental shrimp.

The Cardinal shrimp is part of the Sulawesi family that thrives on algae. They will help you with Black Beard Algae consumption, but they demand a lot in return. The water quality must be more pristine and parameters cannot fluctuate as much as they can for other shrimp species.

Nerite snails are extremely popular in this hobby for their ability to devour the toughest forms of algae from hair to brush types including Black Beard Algae. Relatively inexpensive and highly mobile, the Nerite snail will spend it’s time in your tank with a focus on taking care of any algae problems you may have.

Common and characteristically appealing, the Mystery snail is a welcome addition to many aquariums as detritivores who eat many types of algae. Since they can grow up to 2 inches, the Mystery snail can pack a punch with its appetite to take down their fair share of Black Beard Algae.

The Malaysian Trumpet snail breeds rapidly under the right conditions and loves digging into the substrate for bits of leftover debris. The Black Beard Algae growth must be contained along the bottom layer of the tank for Malaysian Trumpet Snails to be interested in nibbling on it.

Unfortunately no. Black Beard Algae tends to cling tightly to surfaces like rocks and decorations along with leaves on live plants. It is difficult to remove by hand and most fish who may show some interest in taking a bite may fail due the difficulty of tearing off pieces.

A Siamese Algae Eater or Florida Flag Fish will be more successful than most fish in eating Black Beard Algae.

2. Does Anything Eat Black Hair Algae?

It is not fair to say that anything will eat Black Beard Algae due to its rough texture and the unique feeding preferences of various aquatic life.

Yes. Certain live bearers such as Molly fish nibble on various types of algae including Black Beard Algae. Since this type of algae clings firmly to surfaces in your tank, your Mollies may have difficulty removing bite sized pieces and may move onto other food sources or types of algae that are easier to consume.

Yes. Snails are invertebrates capable of devouring the toughest algae growth including Black Beard Algae. Keep in mind that many snails such as Pond Snails breed rapidly and can become a nuisance themselves. Nerite Snails do a great job at focusing on algae consumption throughout the day.

Nerite Snails are our favorite algae eating snail. They make their way across the entire tank in their search for algae. They do not discriminate between the varieties of algae and will do their best in their diminutive size to consume as much Black Beard Algae as possible.

Yes. Otos are easy to keep for beginner aquarists due to their peaceful nature and desire to dwell on the bottom layer of the tank while keeping to themselves as they graze on various forms of algae. They can grind down tougher bits of Black Beard Algae better than most fish and are recommended for this reason.

We hope that are in depth article focusing on Black Beard Algae eaters will help to control, remove and hopefully eliminate the build up of this unwanted intrusion in your tank.

If you would like to learn more about treatment and prevention, continue on and check out our article on How Do I Get Rid Of Black Beard Algae In My Fish Tank.

Thanks for visiting HelpUsFish.com with your concerns or curiosity surrounding Black Beard Algae. We have plenty more informative articles on algae and other aquatic life that may also be of interest to you. See you soon!