Are you here to find out if Lionfish are hunted by any larger fish in their native habitat? Do Lionfish Have Predators?

Can this venomous hunter become the hunted? In this article, we’ll find out if Lionfish can ever become prey.

Do Lionfish Have Predators?

Lionfish do not have natural predators in areas where they hunt. Reef sharks, groupers, eels, snapper and triggerfish can opportunistically eat a Lionfish, but they do not actively seek them out as natural predators. The true predator who purposely hunts down Lionfish is a human. Can a Shark Eat a Lionfish?

Yes. Reef sharks are one of the few animals in the open waters that can successfully ingest a lionfish whole.

In order to protect itself from the venomous spikes on the tail fin or back of a lionfish, a reef shark will attempt to devour a lionfish starting from its mouth.

Most of the time we witness lionfish being eaten by larger fish when they are being offered the meal on a spike. That is to say, most of the time a human is catching the lionfish on a spear and offering it to a predatory fish such as:

A barracuda can certainly eat a lionfish that is able to fit into its mouth. There is no direct evidence to suggest that a barracuda actively hunts a lionfish in its invasive range.

When Are Lionfish Usually Hunted And Eaten?

If a lionfish is wounded then it becomes an easy target for a larger predator. Sometimes humans are the ones who are hurting and chasing lionfish.

At this point they are an easier target for an oncoming predator who may count on the opportunity to swallow a fleeing lionfish.

This is not an example of a natural predator because of human involvement. Large eels and snappers have been witnessed to follow divers who spear lionfish, looking for an easy meal.

This is a perfect example of opportunistic predation and not natural predation. 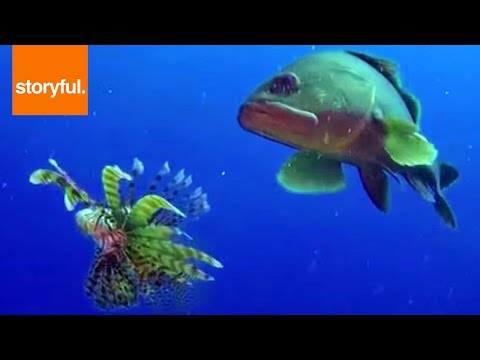 Yes. Humans have been actively hunting lionfish to reduce their numbers in the wild, but some are interested in feasting off of their meat.

Indigenous cultures rely on any type of available wildlife including lionfish when the opportunity presents itself. A lionfish can be cooked or eaten as a ceviche.

The meat apparently tastes mild in flavor and tender in texture. We have never tasted lionfish before, but you can email us and let us know if you have and what you thought of its taste.

Which Fish Eat Lionfish In Their Native Habitat?

The Indo-Pacific and Red Sea regions include predators that do not actively seek to eat lionfish, but will take the opportunity when it’s presented.

The following species of fish have been witnessed to consume lionfish:

We cannot say for certain if the humans who are witnessing lionfish being eaten are not actually training the species by sometimes offering the lionfish to them on a spear.

One example of a lionfish being naturally hunted by a predator was offered by a fishery biologist who witnessed a Moray eel coughing up a lionfish when it landed on the deck of a boat.

What is unknown is if the Moray eel was actually in the invasive area where lionfish naturally congregate and hunt. A rogue lionfish may have been in open waters away from its natural habitat.

In this instance, it could have been confused or wounded and become an easy target for the Moray eel to eat it. The evidence is not clear enough to suggest that a moray eel is a natural predator of the lionfish.

Does It Hurt a Fish When It Eats a Venomous Lionfish?

The best evidence currently suggests that because fish are cold-blooded, the venom inside a lionfish doesn’t produce the same poisonous effect as it would on a warm-blooded animal.

Keep in mind that lionfish are not using their venom when they are actively hunting and attacking smaller prey.

The venom may thwart the attack of a larger predator who is hunting a lionfish from behind.

If a predator attacks head to head, the venom may not detract or cause enough harm while the larger fish consumes the lionfish.

What Is The Top Predator Of A Lionfish?

The answer to this question depends on who you ask. You may find divers expressing their opinion about reef sharks, groupers or large snappers being the more dominant predator of a lionfish.

The problem is that most of these people may have assisted in the process of offering the lionfish to the larger predators.

The true answer that we believe to be correct is that humans are in fact the top predator of lionfish. Humans conduct targeted removals to reduce the number of lionfish in the wild.

It is a growing concern that the number of lionfish are growing and need to be kept in check to establish a balance in the oceans and seas.

There is much research that is needed to be conducted in the invasive regions where lionfish occupy.

The popular opinion continues to remain that lionfish do not actually have natural predators, but they are opportunistically feasted upon by predators who are offered lionfish by humans.

It has been determined that in order to reduce the number of lionfish in the wild, humans should interfere at some locations and actively hunt them down. This makes humans the number one active predator of lionfish.

Thanks for visiting HelpUsFish.com for another article on Lionfish. Check out more of our articles on the variety of aquatic and marine life we research and keep. Bye for now!