Are you trying to get your Tiger Barbs to school with other Barb fish? Will they get aggressive, keep to themselves or join up? In this article, we’ll find out if Tiger Barbs can school with the rest of the Barb species.

Do Different Types Barbs School Together?

Tiger barbs (Puntius tetrazona) are available is multiple types ranging from Albino, Glofish and Green varieties. Some are more modified than others, but derive from the same family. If you have enough space in a tank size of 30 gallons or larger, you may find them all schooling together.

The Cherry Barb (Puntius titteya) is of a different species, but also related to the Tiger Barb. They are not going to school with your Tiger Barbs. You will find them on their own as they are relatively shy and not as boisterous as Tiger Barbs.

Barb fish that are bred in captivity tend to be more likely to school together in your tank compared to any that are wild caught. Do not expect them to school tightly throughout the day. The behavior can be more erratic, playful, rambunctious and resembles shoaling more often than schooling.

Can You Put Different Barbs Together?

The first thing you need to make sure of when keeping different Barb fish together is to have plenty of space. They are fast moving and active fish that will stress out slow movers who occupy the same spaces at the top or mid-level of the tank.

Keep your Barb fish in groups of 5 or more and allow them to interact with each other naturally. If you ask someone working at a fish shop, they will say that many Barb fish will school with your Tiger Barbs. If the space doesn’t allow for it in a tank smaller than 30 gallons, we advise against it.

Keeping only 1-4 of each type of Barb fish may contribute to stress or further aggression. They may not stop trying to bully or establish their hierarchy within their smaller groups. This could leave other Barbs or tankmates feeling stressed.

In most cases, they will school together. If you keep 1-4 Green Barbs with 1-4 Tiger Barbs, you might not get the positive results you were looking for. The Tiger Barbs could get aggressive with the Green Barbs and vice versa.

There could be fin nipping, constant chasing and other forms of bullying when the group numbers are too low. Compatibility is an issue with Barb fish who haven’t established a pecking order in groups of 5 or more.

Adding 2 Green and 3 Tiger Barbs doesn’t equal a school of 5 in most cases. If you have the room, add up to 5 of each variety for better results. 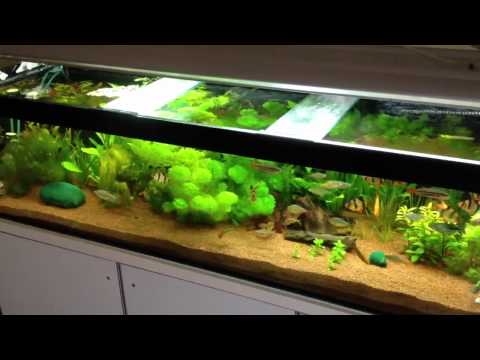 Cherry Barbs are shy, timid and they may also spread out to hide. They do not wish to school together as often as Tiger Barbs. We would consider them to be nervous, but also very easy-going.

Cherry Barbs grow to about 1-2 inches in length and can be kept in the same tank with Tiger Barbs if there is enough room. Consider tanks larger than 30 gallons. The required pH levels between 6.0-8.0 and temperatures of 73-79°F make them compatible with Tiger Barbs, even if they don’t school together.

What Fish Are Compatible With Tiger Barbs?

Compatibility with Tiger Barbs relies on various factors ranging from:

The tankmates below would make a great fit with Tiger Barbs because they can keep up with their pace and not be disturbed by their boisterous nature. The bottom dwellers also make this list because they reside further away at the bottom of the tank and don’t get in the way.

Let us know if you have kept your Tiger Barbs successfully with any other fish or invertebrates by emailing us.

Tiger Barbs can school with Green, Albino and Glofish varieties, but they are plenty of exceptions and additions. It depends on your tank size and overall demeanor or aggression levels present in your aquarium.

Some Barbs like Cherry Barbs will not school with your Tiger Barbs. A Clown Loach may join in with a group of Tiger Barbs from time to time. The schooling behavior you see isn’t a necessity in a peaceful tank. Shoaling takes place in times of perceived fear to look larger with their strength in numbers.

Thanks for visiting HelpUsFish.com with your concerns or curiosity surrounding Barb Fish. We have plenty more informative articles on these and other aquatic life that may also be of interest to you. See you soon!