Are  you wondering how a Blue Tang will behave in your tank?  How do Blue Tangs interact with other tangs? In this article, we’ll discuss the topic of Blue Tang behavior.

Blue Tang Behavior: Blue tangs are more aggressive with other Tangs in captivity where territories and swimming spaces may come into question where sharing is not an option. They move peacefully around most other tankmates and try to stay out of the way. What Is Special About the Blue Tang?

There are many special characteristics of the Blue Tang that makes this fish so appealing to marine life hobbyists. They are not for beginners because of their water quality, dietary and temperamental needs.

Give your Blue Tang plenty of room to swim and dart around while keeping away from larger predatory fish that occupy the top and mid-level of your reef tank.

What Are Blue Tangs Known As?

Blue Tangs go by many other names. You may call them Regal Blue Tangs depending on its species type, but there are other common names such as:

Do Discus Fish Like Planted Tank? Blue Diamond Discus In a Planted Aquarium.

You may hear some children or adults simply referring to them a Dory fish, but that is due to the rising popularity through starring alongside a very famous clownfish on the big screen in movie theaters around the world for many years.

This is a peaceful fish, but the Blue Tang doesn’t wish to be provoked into any disturbances in the tank.

They are peaceful towards most marine life and would keep away from larger fish that can fit the size of an adult Blue Tang into their mouths.

These fish are still considered territorial even though they spend much of their darting around the tank. They may not wish to share their spaces with other tang varieties.

You can keep a large school of Blue Tangs, but most home aquariums are simply not big enough. In this case, it’s better to keep only one Blue Tang in a 100 gallon tank. 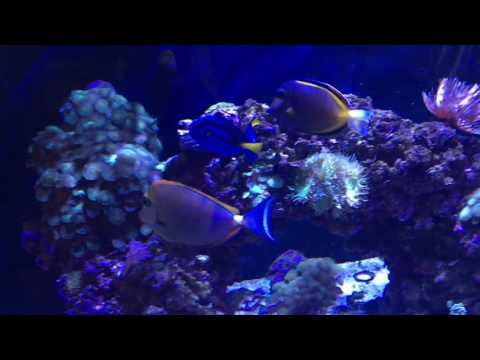 Why Do Blue Tangs Hide?

A Blue Tang that is hiding could be doing so for the following reasons:

Younger Blue Tangs hide more often. They need time and care to grow up in a spacious tank at 6 feet in length or more and 100 gallons in size or larger. There is no compromise on this.

A Blue Tang doesn’t seem large at a maximum of 12 inches, but they will hide or become very stressed if they can’t maneuver around a large tank like they would in the wild.

Blue Tangs are considered to be semi-aggressive marine fish in reef tanks where there are tankmates occupying the same swimming spaces and territories.

They may target other Tangs to keep away from their established territory, but act peaceful towards other tankmates. Blue Tangs are one of the most peaceful Tang species.

Aggressive tankmates that pursue the relatively peaceful Blue Tang may cause them to hide excessively and give up eating as a result.

Generally speaking, carnivorous or omnivorous tankmates and marine life in the wild may try to eat anything they can fit into their mouths.

A juvenile Blue Tang could be eaten by a variety of species, but their advantage lies in their ability to swim or dart swiftly and rapidly. The known predators of Blue Tangs in the wild are:

What Does The Blue Tang Eat?

A Blue Tang opportunistically eats what is available around coral reefs. They target algae and can also eat sponges.

Blue Tangs In the Wild Eat:

Why Is My Blue Tang Laying On Its Side?

In most cases, when we see our aquatic animals laying on their side, we get immediately concerned. The behavior of a Blue Tang is peculiar in many ways including the ability to normally lay on its side.

This is a type of fainting that helps a Blue Tang resist strong currents. If there isn’t a strong wave maker or powerhead making currents, the act of laying on the side may go back to a sign of stress.

Check the water quality first and make sure your Blue Tang is not being chased or bullied.

The Blue Tang is an interesting and entertaining fish to keep in a reef tank at 100 gallons or larger. Smaller spaces will not suffice and lead to hiding or other forms of unwanted stress.

A blue tang may faint at the sight of a predator or lie on its side to resist currents. You shouldn’t be alarmed when you see this posture. It should only be temporary.

Although they have sharp venomous spines on their tail, don’t expect your Blue Tang to ever use them.

Thanks for visiting HelpUsFish.com with your concerns or curiosity surrounding Blue Tangs. We have plenty more informative articles on these and other marine life that may also be of interest to you. See you soon!