Can You Touch A Puffer Fish? Pufferfish in the wild secrete a deadly Tetrodotoxin that can kill humans in under an hour. Pufferfish in aquariums don’t produce this toxin and are safe to touch. It’s advised to wear gloves or avoid touching pufferfish altogether unless absolutely necessary.

Although you may see pictures and videos of people touching, petting or holding pufferfish, we advise against it. We don’t condone the actions taken by the individuals in these pictures. Handle with care or don’t handle them at all. Is My Puffer Fish Poisonous?

We recommend that you research your particular type of pufferfish. It’s crucial to find out if your pufferfish has been raised in a fish store or in captivity. A pufferfish arriving directly from the wild is definitely poisonous.

The bacteria available in the wild from their habitat and food causes pufferfish to easily produce and secrete tetrodotoxin when threatened. Puffing out their bodies or secreting this toxin helps to avoid being eaten by predators who are able to catch up to slower swimming pufferfish.

If a puffer fish stops getting access to the bacteria it gets from the wild through food sources like wild snails, it will stop producing tetrodotoxin. This makes your puffer fish that has lived its life in a aquarium fairly safe to touch.

Where Is The Toxin On Puffer Fish?

The tetrodotoxins found in puffer fish are located in the following areas:

If your puffer fish has been living in a tank, it won’t be able to secrete this toxin due to the lack of availability of the bacteria that it needs to produce it.

Why Are Puffer Fish Poisonous?

A puffer fish isn’t a fast swimmer in the wild. The poison is their last line of defense. A pufferfish is unique in its ability to use four main methods of defense.

The next best option once a predator has caught up to a puffer fish is to swell up with air or water making it very hard to swallow.

The spines secrete the tetrodotoxin much easier when they are puffed out. If the predator is large enough to swallow the puffed out prey, it will certainly die from the poison through the spines of the pufferfish. 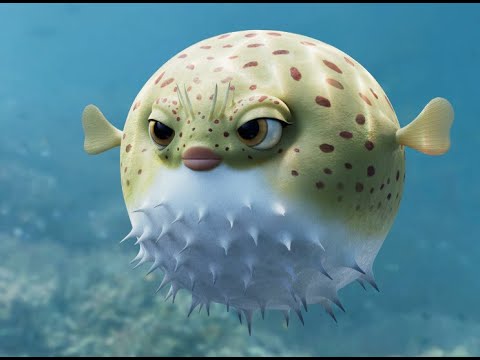 How Poisonous Is A Pufferfish?

The poison has no known antidote. You must act quickly when you are stung by a puffer fish in the wild. If your pufferfish in your aquarium has made contact with you, do not be alarmed. This pet that you are keeping has stopped producing the deadly toxin because it doesn’t have access to the bacteria in the wild to produce it.

What Happens When You Get Poisoned By A Puffer Fish?

You will start to notice symptoms right away or up to two hours. Handling a wild puffer fish is extremely dangerous. You may notice the following symptoms in this order:

As soon as any tingling is felt, it’s best to act quickly and seek medical help. Although there is no known antidote, hospitals are equipped to treat patients who have been poisoned by puffer fish. We recommend avoiding contact with puffer fish in the wild or use thick gloves before doing so.

My Puffer Fish Is Not Poisonous. Can I Touch It?

May people report that their puffer fish enjoy swimming up to them. When you arrive into the room, you can notice that your puffer fish has spotted you. They have incredible eyesight and they have emotions.

Some puffer fish want to make contact with you. They may turn a little to their side and invite you to touch their bellies. It’s very enticing to do so, but please consider on thing first.

The slime coating on the puffer fish prevents it from catching diseases from the bacteria and active chemicals in the water. Puffer fish aren’t protected with scales. The coating is crucial in your tank to keep them hardy and thriving.

Try not to touch the puffer fish in your tank, even if they aren’t poisonous. Puffer fish are amazing in many ways. One of these ways will kill you. A puffer fish produces and secretes tetrodotoxin in the wild from the bacteria found there. Once established in a tank, they won’t be able to produce this deadly toxin, making them safer to touch.

If you want to touch pufferfish in an aquarium, remember that the slime coating on their bodies are important to ward off illnesses or parasites. Do so with care and keep it to a minimum if possible. Wearing gloves is recommended in all cases.

We hope this article gives you enough insight on the deadly nature of pufferfish in the wild. We strongly advise that you take the time to research your particular type of pufferfish in order to provide the best possible environment for this unique fish to thrive in your aquarium. See you next time!