Is your mystery snail floating at the top of your tank.?

Why is my mystery snail floating? How do you tell if your Mystery Snail is dead?

In this article, we’ll find out why is my Mystery Snail floating and hope the information helps you figure out what’s going in your tank as well.

Why Is My Mystery Snail Floating?

A mystery snail will float at the top of the tank when it:

Usually, this tells you there is something wrong with the water.

If your mystery snail is floating it is because of an issue that we can probably fix which I will go through below. Why Does My Mystery Snail Keep Floating?

The 3 main reasons why your mystery snail is floating include:

1. Trapped Air In The Lungs

Mystery snail is a bit notorious and reckless when it comes to closing up their lungs. Consequently, a bit of air gets trapped inside, and they imitate the principle of a balloon.

Once the air gets stuck, they rise to the surface of the water and start floating. This floating will only last as long as there is trapped air in the lungs. Once they open up and lose the air, they will fall back to the base of the tank.

2. Presence Of Film In The Tank

Some milky films appear at the surface of some freshwater aquariums as a result of inadequate surface agitation or some harmless bacteria.

These two conditions permit plant protein and remnant food particles to join together and form a film. This film is, however, not harmful to the members of your tanks, and some snails like the mystery snail love to munch on it.

Therefore, they find their way to the top of the tank, floating upside down while munching the film. However, you can get rid of this film by adding air stone, using a paper towel, or increasing the filter in your tank.

if mystery snail is not very comfortable with the water conditions of the tank, they can float in protest. They can also attempt to climb out of the shell as part of their survival instinct.

The primary factors that make mystery snails uncomfortable with tank water are nitrates, nitrites, and ammonia levels. You can check the level of the parameters by only using a strip.

Likewise, you can regulate it and bring it down to an average level by changing at least 20% of the water each day until it returns to the average level.

Below is a good video I found on youtube about why snails float: 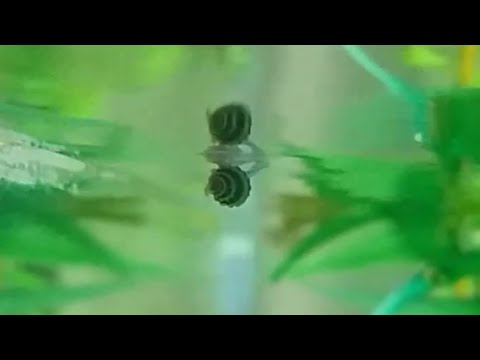 How To Get My Snail To Stop Floating

Once you can figure out the exact reason that is responsible for the floating, then you should choose the best way to fix the problem. How To Get An Air Bubble Out Of A Mystery Snail

If you have identified that there is an air bubble inside your mystery snail you will need to get it out as soon as you can.

The best way to do this is:

Keep an eye out for the bubble leaving the snails shell.

How Long Do Mystery Snails Float For?

A mystery snail usually floats because it has trapped air in its lungs, so as soon as the air bubble is removed they will sink again, it usually takes a few hours to a day for the air bubble to be removed.

If your snail is floating for more than a day this is not an issue, I have known snails to float for up to two weeks with no issues.

Just check if they are moving and have access to food.

Why Is My Mystery Snail Hanging Out of Shell Floating?

Mystery snails are known for their peculiar behavior. If you notice them hanging out of their shell floating, it could be a reaction due to changes in water parameters.

In the wild, mystery snails try to float or escape from their shell when they’re trying to get away from pollution. This is a survival instinct of your mystery snail, but also one that could lead to its death.

Another reason why your Mystery snail is hanging out of its shell and floating is probably due to copper poisoning. If you ever had as a fertilizer or copper enter the tank through medications that you have recently administered.

Mystery snails may display this symptom of hanging out of their shell and trying to float up to escape it.

How To Tell If Your Mystery Snail Is Dead

Mystery snails can act inactive in the tank for days, but this does not ultimately translate to the fact that it is dead. You still need to carry out some close examinations before concluding if your mystery snail is dead or not.

If you suspect that your snail is dead, you need to carry out some confirmation tests: No. Mystery snails are hardy and will live for around a year in good water conditions.  If they are transferred from one tank to another where the water conditions are different it is common for them to die after a few hours.

It is highly recommended not to transfer your mystery snail from one tank to another as they might not be able to adapt to the new water conditions.

Why Is My Mystery Snail Floating Upside Down?

Snails will float when they die. You can tell that the snail is dead if they have not moved for a long time and they are also hanging out of their shell slightly.

Sometimes the snail is not dead when they are floating at the top of the aquarium, monitor the snail over a period of a day to make sure that they have actually died.

It could be due to:

Mystery snails typically live for about a year in good water conditions, This could give you a clue if they are dead.

Typically a snail will start to float a few hours after they have passed away.

It is usual for mystery snails to move around the base of freshwater tanks, have fun with aquarium plants, and climb the surfaces of the container.

It is entirely normal to find them floating at the top of the tank when they are alive.