Are you noticing your neon tetras nipping at the fins of their tankmates? Are they acting aggressively because there’s a problem? In this article we will discuss if something is wrong and causing neon tetras to be fish nippers.

Yes, they are. They do it often when stressed. The causes of stress could be due to tank size, water parameters and other factors that this article will dive into.

We must also recognize what isn’t fin nipping and just playful behavior or mating rituals. When fins are being nipped, we must also know what we can do to help.

Why Are My Neon Tetras Acting Aggressively?

It’s important to note that neon tetras aren’t very aggressive fish. They are small in size and generally peaceful. Sometimes they react to stress with fin nipping as a sign of protection or defense.

Is My Tank Size Causing My Neon Tetra to Nip at Fins?

It’s easy to remember to stock one neon tetra to 1 gallon of water. 6 neon tetras are the limit for a 10 gallon tank. Mixing them in with your other fish requires more research to fit them all.

If a tank is too small, the fish could bump into each other and compete for space. The stress from this will lead fish who are known to be fin nippers to take part in this aggressive reaction. Neon tetras are included.

Are New Tankmates Causing Neon Tetras to Be Fin Nippers?

If larger tankmates are introduced, they may initiate the fin nipping. The neon tetras may do the same in response to the larger threat.

Neon tetras will school together in times of stress and mimic one another. They can swim in the same pattern and nip at the fins of the larger fish.

A fish with larger fins is also susceptible to fin nipping attacks. A neon tetra may initiate it out of curiosity and sheer desire to nip at a longer fin that passes near them.

Yes and no. Neon Tetras may swim erratically if ammonia, nitrate or nitrite levels aren’t ideal for them to live and thrive healthy lives.

Check that ammonia levels are stable and make sure the temperature of the water isn’t fluctuating. Water parameters have been known to influence aggressive behavior. Poor conditions can trigger neon tetras to become fin nippers in some cases.

The strength in numbers debate will rise to the surface here. A neon tetra is too small to bully larger fish. They are able to school together and become more confident in their ability to unify and nip at larger fish.

The bullying can ignite with battles for space in the tank or for food. If a larger fish is trying to intercept neo tetras from eating or enjoying their playful chasing, they’ll turn their attention as a unit and may get aggressive. 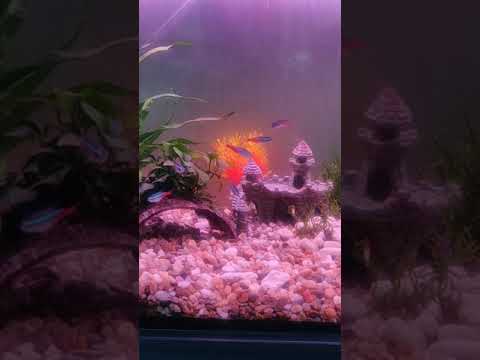 Fin nipping can kill over time because the fish will become stressed. It is generally accepted now that fish do feel pain, though it is still debated, so I would say that yes, it is hurting them.

Neon tetras are acutely able to detect a change in their habitat. If changes have been made to the tank or new fish have been added, neon tetras will notice quickly. The response may turn into aggression and fin nipping.

Although they are small, neon tetras can inevitably cause harm after repeated fin nipping. One neon tetra isn’t usually responsible for the demise of a tankmate.

Neon tetras acting together in this type of aggressive behavior may cause enough harm to gravely injure other fish.  The fins that are being nipped at could eventually turn into something serious enough to kill the fish.

Fin rot looks white in color and noticeable at the edge of the fins. This usually indicates that the fins are being nipped. Fin rot can be treated, but the victim must be removed right after noticing this.

If you notice red streaks on the victim, it could indicate a bacterial infection. Fin nipping must be taken seriously if it continues to harm other fish. If the fins of the victim turn black is could be a sign of ammonia poisoning.

In many cases, you will not notice a change in the color of the fins being nipped at.  The fin will retain its regular color for the time being. Noticing the action early can prevent physical and harmful changes to the nipped fins.

There are signs to notice if the neon tetras aren’t fin nipping. They could be playful or they are preparing for something more important. How can we tell if they are just mating and not fin nipping? In most cases, the wounds will heal. A fin that is nipped at by neon tetras will be harmed, but due to their small mouths, the chance for the victim to recover fin function and normality are high.

Fins can return to their original size, shape and color. It could take 4-6 weeks, but recovery is more likely with isolation and treatment.

My Old Neon Tetras Are Nipping The Fins of My Newer Neon Tetras. Is this Normal?

Yes, this is quite common. Older neon tetras have a strong sense to changes in their habitat. The new fish is a stranger for now and is treated with some aggression in the form of fin nipping.

There is a ranking order amongst the neon tetras who are taking part in this behavior. The fin nipping will establish dominance and decide who ranks above the rest. The neon tetras may not exercise full force during the process. Observe to see if it escalates.

Neon Tetras are fin nippers. They are also playful and peaceful in many circumstances. Make sure of the following and you should be clear of major problems connected to fin nipping neon tetras.

Beginner fish keepers may get stressed out to see the fin nipping, but this isn’t a huge problem for neon tetras. Observe and react accordingly. Make sure they are not playing or mating before worrying too much about it.